Schoestress, how to get rid of it ?

Didi and I have come to the conclusion that we have far too much and indeed our girls too. Because of this insight, we started ‘the big cleanup’ a while ago. Let’s  get rid of all that materialistic shit !!!

Because we are currently staying at a campsite, makes this process considerably easier. That materialistic stuff does not fit in our chalet of  52 m2. Certainly, relinquishing all your stuff is a big change and it does something to you. To give an example:
Mother of the house (I myself :-)) had quite a big shoe collection. I had a special shoe cabinet in our house. One that reached up to the ceiling, with pull-out drawers. The cabinet was overfilled. The thing is that when the shoe cabinet was sold (all shoes had to be removed), I came to the realization:

Damn, why so much?

I quickly put the shoes in trash bags and took them to the campsite to sort my shoes in peace and quiet. I put them neatly pair by pair and this was the result: 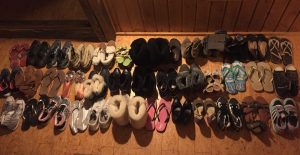 On this picture are about 40 pairs of shoes. Afterwards, it turned out that I had more (15 pairs in a closet in the attic).  My idea was to keep 10 pairs of the 55 pair of shoes and that’s it! The beginning was easy. I certainly did not wear half of all the shoes I had, so within no time I only had 22 pairs left. So now to the next step of 1o pair of shoes. 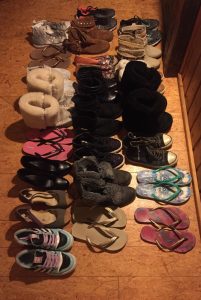 Wow, now it was getting more difficult.  Well, I had to make very conscious choices;) and that was not easy, but I succeeded and check only 10 pairs of shoes. To be honest, when I am writing this I still think that this is a lot because I know many people in the world are happy if they would own 1 pair of shoes. But again we are taking step by step and the 10 pair will probably be reduced some more when I am used to the idea. 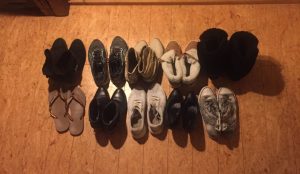 I can say that the first week I had to get used to it but now it feels normal or even lux to have 10 pairs of shoes. Most of the shoes are already sold so again some extra money to live.  The huge amount of shoes I needed to select out of every day, was gone. I can still remember that I visited my mother that week and stood in front of her closet with shoes (my mother has so many shoes, my collection was nothing, hihihi). The temptation to borrow shoes from her was huge, but I did not do it. Shoulder pat for myself.

Now, again a few weeks later, it turns out that I really like this; so much less choice. It is now much easier. No more shoe stress :-). And I know: I can buy new shoes, but I want this: NO. The shoes that I have now are more than enough. It can probably be done with even less, but Rome is not built in a single day either.

I will buy only buy new shoes when the old ones are worn out.

Love Romaine, minimalist in the making.