Do Italy and the Pope accept bitcoin ? 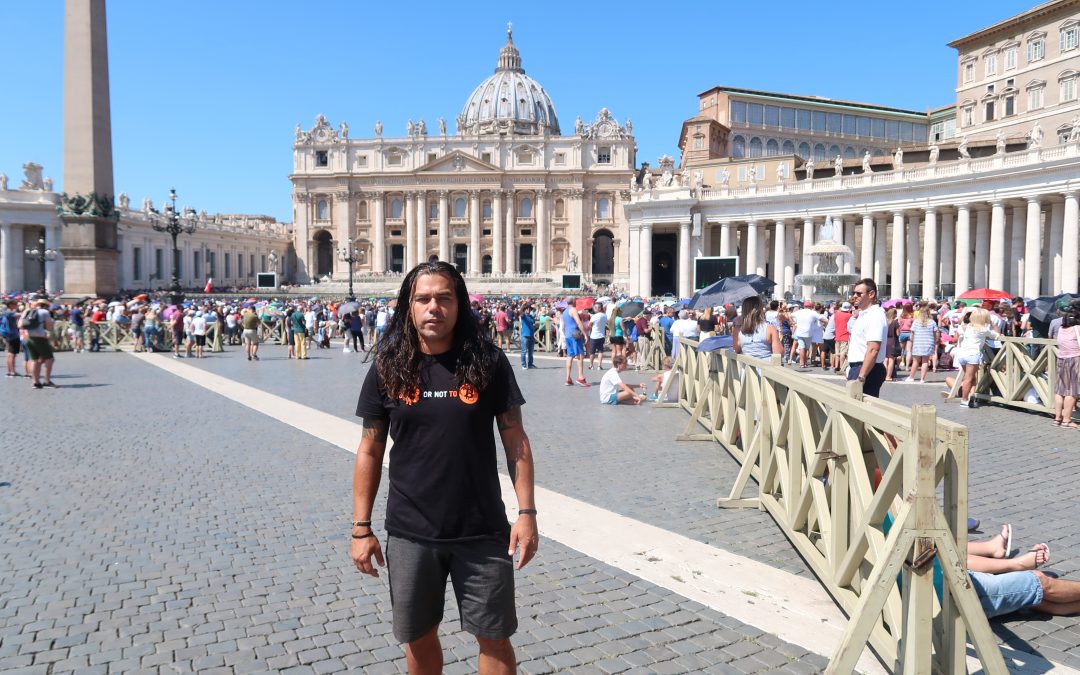 We have been traveling through Italy for a month to discover how Bitcoin is accepted by the maffia hahaha. No of course how it’s accepted in this beautiful country. We visited a few of places where Bitcoin was accepted and Rovereto was the most impressive for me.  But first an often asked question about taxes in Italy.

Taxes on crypto in Italy

At the moment there is no Italian law that requires an owner of Bitcoins or other cryptos to declare that he/she owns cryptos, nor does he/she have to pay taxes just because he/she is holding cryptocurrencies. At present, there is no Italian law that regulates taxes due on capital gains obtained from cryptocurrency transactions, such as Bitcoin, Litecoin, Verge, Bitcoin private Ethereum or xlm. For this reason, it is not clear what a taxpayer must do in case he obtains capital gains by buying and selling cryptos. According to many fiscal experts, if you are operating as a private citizen there is no speculative purpose and, thus, your income is not taxable, unless you pass the (equivalent to) €51,645.69 threshold for at least 7 days in a year.

There I was parking my campervan in Rovereto. I wanted to visit this town during our European Bitcoin Tour because it is called Bitcoin valley. And yes Bitcoin valley it is. Rovereto is this beautiful traditional town in the north of Italy with an amazing historic center. If you don’t know about Bitcoin you would never guess that this traditional town is all about Bitcoin. I started to cycle into the center to discover how many stores were accepting cryptocurrency. I could already stop after 2 minutes when passing a shop with ” we accept Bitcoin” on the door. As always I didn’t have a plan so I just asked if I could film and make some pictures. There were flyers in the shop about what Bitcoin was and on how to accept and use Bitcoin. I immediately felt at home in this town. Back on the bike to find some more businesses but I needed to stop after a few hundred meters because the next store was already there. I decided to walk further as all the shops were so close by. This store was a traditional butcher where you can buy meat, homemade olive oil etc. with Bitcoin. The amazing thing was that it was a small store and the woman behind the register was an elderly woman. A bit like my grandma but then this one knew about Bitcoin and how to accept it etc. WTF,  this couldn’t be true and I pinched myself to see if I wasn’t dreaming. No, I was alive!

By the way a small thing I love to share about being alive. A lot of people talk about mindfulness and many other ways to become happier but I love the way a very respected Indian guru ,Sadghuru,  brings it.

“ If you wake up in de morning, the first thing you do is check if you are alive. If you are breathing and alive realize that this morning hundreds of thousand people didn’t wake up. Then check on your partner and kids. Are they alive? Yes, again realize that you all woke up while many people didn’t and enjoy the day. Pinch yourself every hour to remind yourself that you are alive, which of course is the most important thing in life”

Did you just read in a beautiful Indian English way, Hahaha? If not try it again but now with an Indian accent, lol.

So I was alive and all these shops were really accepting Bitcoin as if it is the most normal thing in life. To be clear, for me it is but for many, it is still not real. I walked a bit further and I discovered more and more shops that were accepting Bitcoin. If I wanted I could have bought, groceries, meat, bread, clothes, toys in a toy store, get my driving license, pay the hairdresser, doctor and dentist, buy a motorcycle and even buy E-cigarettes. The most impressive shop was Compro euro where you could buy Bitcoin at their BTC ATM, Paper wallets, and many other Bitcoin Items. I, of course, bought a few t-shirts etc and because they recognized me from The Bitcoin Family, they gave me some caps for the kids for free. I have to admit because I am a man, that the girl working in the shop looked like a model that just came from the catwalk. Yes, bitcoin is sexy hahaha. I will leave a link to the shop at the end of this article. 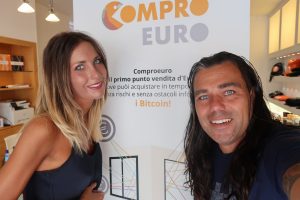 It kept amazing me how a traditional Italian town like this evolved into a Bitcoin-accepting town and  I realized every town just needs one motor that drives them in accepting Bitcoin. For Rovereto, this motor probably is Compro Euro combined with inbitcoin.it  So if we want Bitcoin to go mainstream we need to address the entrepreneurs in every town and just one of those needs to simplify accepting Bitcoin for all the shops in town. If an old traditional town like Rovereto can do it, believe me, any modern town can do it as well.

During our travels through Italy, we discovered that so many people nowadays know about Bitcoin. I was so happy to see that the tower of Pisa was wearing a BTC cap. Of course, it’s amazing how this tower still stands. It has been corrected  just like Bitcoin needed a correction to keep existing. Many people are afraid and I receive many negative messages and emails which indicates to me that we are in the anger/depression phase. Huh, anger/depression phase? What is that? I will tell you. Every coin has his market cycle which mostly depends on the emotions of the people that are buying and selling in the market. This cycle repeats itself every time and starts with disbelief and ends with depression. To be a good trader you need to learn to buy in the anger/ depression phase and sell in the euphoria phase. 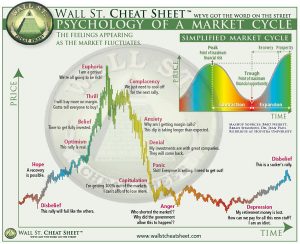 Looks easy but believe me it isn’t. Every coin will make this cycle. Even Bitcoin made it as you can see on the image below. Very similar isn’t it? Yes, the points are not perfect but its just an example to illustrate the market cycle. 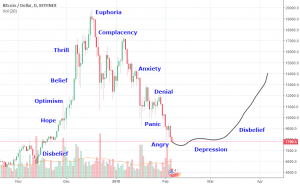 That a coin follows this cycle doesn’t mean it won’t go up in value as you can see in the following three pictures these cycles repeat itself while the value slowly goes up. Yes, you can take a peek to the end of the curve to see where BTC could end hahaha. 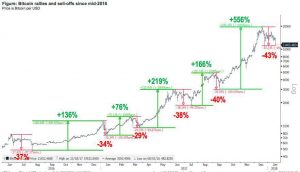 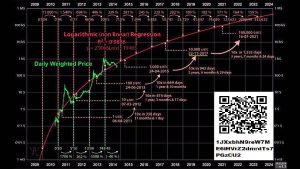 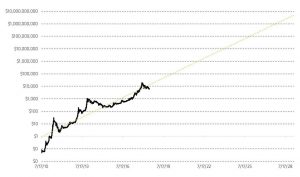 Back to Italy. From the elderly people in Rovereto to the pope. Everybody has heard about Bitcoin so in my opinion, we are in the pre mass adaption phase. Many people know about it and the next step is that more and more people will understand it and start to adapt and use it. The people just need to lose fear like they lost the fear of using ATM machines, using credit cards online and using PayPal. This takes some time but eventually, everybody will start using crypto and we all will say “ we knew it” My advice, don’t be the person that in a few years time will say I knew it but I didn’t believe it enough to buy it. If you have some spare money then make sure you get 1 bitcoin and just hodl it for a few years. In my non-professional opinion the best investment you can make at the moment. Check as an illustration these images about phases of adaption. 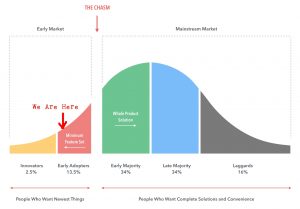 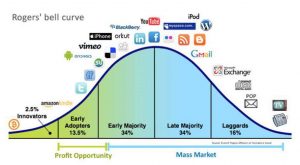 I could write pages on Italy and accepting Bitcoin but I will keep it to Rome. Yes, Rome is a very beautiful city and it is also accepting Bitcoin. To start with Italy’s largest taxi fleet, Cooperativa RadioTaxi 3570, now accepts Bitcoin. The company boasts over 3,700 cars in Rome, providing more than 10 million cab services each year. Then there is this amazing mansion being sold for €38.000.000, about 6765 bitcoin when I wrote this article. Check the video I made on this amazing house in the center of Rome https://youtu.be/xV8nzb8YwrI

Of course I visited the pope to see what he had to say about Bitcoin but he was a bit too far away from me to hear me. He stood in this window in a building giving his speech, which he does every Sunday so he couldn’t hear me because of the huge crowd gathering in front of the cathedral, hahaha. People started to look weird at me and I didn’t understand why but then it came to me. 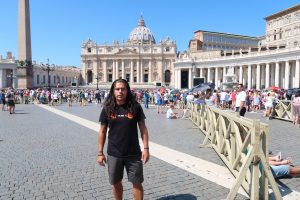 I was wearing flipflops, a bitcoin shirt and my long hair loose. They all must have thought that I was the new Jesus bringing them enlightenment in the form of a new international decentral honest currency called Bitcoin that will change the world forever!